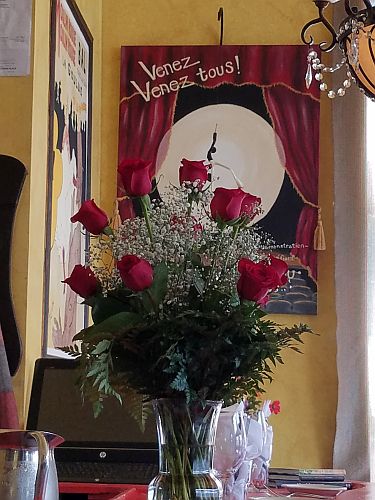 bis·tro [bis·troh; Fr.]
When strolling down the Seine, you stumble upon a charming bistro, the scent of fresh baguettes wafting out of the cozy kitchens and into the street. Patroned by writers, artisans and the simple folk that frequent the morning markets, Parisian bistros feature seasonal menu items that reflect the freshest available ingredients. Le Troquet, a new addition to Albuquerque’s fine dining scene, is akin to the finest bistros of Paris.

Chef Jean Pierre’s main attribute—other than his talent for concocting delicious dishes featuring rich sauces that enhance the delicate flavors of his ingredients—is his humility. In fact, he won’t even say he’s the “best chef,” though clearly, after launching five successful restaurants in Albuquerque, he has earned the right to that moniker. In addition to his exceptional culinary skill, Chef Jean Pierre tastes every entrée before it leaves his kitchen and personally mingles with his guests to ensure their meal is to their satisfaction.

Tucked away in the Downtown area, Le Troquet is a delightful bistro that could easily be overlooked by passersby because of its humble outer appearance. However, when you enter Le Troquet, you are transported to Paris where you partake of baguettes, pate and good wine served up without pretense in good company. This quaint locale presenting the freshest ingredients of the season with rich, flavorful sauces is one of the best places to eat in Albuquerque—complements of the best chef. At Le Troquet, we serve generous portions of fresh seafood, produce and game and pair Chef Jean Pierre’s culinary creations with fine wines from France and California. Contact us today to reserve a table at one of the best places to eat in Albuquerque!

top
We use cookies to ensure that we give you the best experience on our website. If you continue to use this site we will assume that you are happy with it.Ok