Chef Jean Pierre is no stranger to high praise for his culinary excellence. With extraordinary success in each of the 5 restaurants he has launched, Chef Jean Pierre knows what it takes to present savory culinary creations in a comfortable setting. It comes as no surprise that his latest restaurant endeavor has met with rave reviews from tough food critics. Check out what local foodies are saying about Le Troquet by reading the reviews below.

Longtime Albuquerque chef Jean-Pierre Gozard has brought his French cooking to Cafe Jean Pierre near the Albuquerque Downtown area. The mainstay, crepes stuffed with all manner of savory meats and stews, does his kitchen proud. But the draw should be the daily specials, anything from sweetbreads to sole meunière — the dish that ignited Julia Child’s cooking passion on her first visit to France.

Before we ignite passions, a salad course is appropriate. Take the roasted beet salad ($10.25), a layering of purple beets and pink tomato slices flanked with tartly dressed greens. Delicious but for one fatal flaw — unabashedly under ripe tomatoes — it can be a great salad if the seasonality of tomatoes is honored.

The featured Poached Salmon Salad ($10.95) took both salmon and shrimp and tossed them in the best from-scratch mayonnaise I have ever tasted. If it has been awhile since you’ve tasted really good mayo, ask for a little on the side — and I dare you not to eat it by the spoonful. Restraint is shown when you merely dollop it on the hard-boiled eggs, an impromptu deviling.

During our lunch, we enjoyed seeing a nearly full space with relaxed patrons, though with an open ceiling the noise level was rather high. Our server was always friendly and always busy — in a place with this many tables, just one server on hand seems a bit silly. Allowing each course to occur at its own pace meant our lunch stretched to two hours — a shocker when I glanced at the time before leaving.

France shines in its hearty fare crafted from homely ingredients, with little better example than veal liver ($13.95). Chef Jean Pierre sautées shallots to deep brown, briefly searing a few veal liver slices to retain tenderness. Without fancy looks, the flavors combine well enough to overlook a broken and oily pan sauce. Butter-kissed vegetables on the side were flawless and lightly dusted with herbs, a welcome complement to any lunch or dinner entrée. Despite an association with Italy, the lunch menu proudly serves up Chicken Marsala ($12.95), well-flavored even if not the best one we’ve had.

Crepes have always been a specialty of Gozard’s at each of his French restaurants, either stuffed with sautéed and sauced meats or piled high for dessert with chocolate, cream, fruit or ice cream. Each crepe is fringed with a crispy edge and perfectly thick to hold its contents. But when we visited, a few other desserts called out — my tumble of berries with crème fraiche ($6.95) did not disappoint, but an apple tart ($6.95) proved formidable and one of the best desserts my companion had ever eaten. Thin apple slices and a buttery crust sandwiched a nectarlike layer of almond paste, too good to stop eating until every crumb was gone. 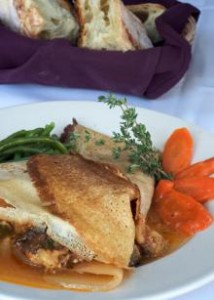 Because it was Bastille Day, a guest wandered into the kitchen and serenaded the cooks with “La Marseillaise,” the national anthem of France. Outside the insulated walls of Le Troquet, the sun beat down on a maze of interconnected parking lots and the Century Rio megaplex. But inside, it was Paris.

The cozy bistro is tastefully decorated with curtained windows, sculptures made from found objects, and paintings of French scenes both elegant and rustic. A galaxy of light fixtures hangs from a high metal ceiling with exposed ducts. Directly above the kitchen, what appears to be the second story of a house—with potted plants on the sills of shuttered windows—is a private dining room for special occasions.

My first meal began with a bowl of vichyssoise, a classic chilled potato and leek soup that Anthony Bourdain credited for his awakening as a foodie, as a young lad aboard a transatlantic crossing. How fitting then that my vichyssoise, served in a wide bowl and sprinkled with minced chives, initiated me into the deep skill set of Chef Jean-Pierre. It was spectacular yet mild; rich but not obscenely so; complex but not busy; earthy and livened with the occasional sliver of bitter potato peel.

The thin, eggy crepe had artfully browned edges and was arranged around a
generous mountain of tender beef with the careful dishevelment of Meg Ryan’s hair. 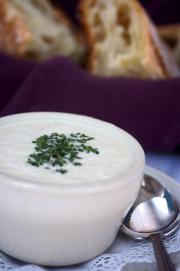 The soup was followed by a boeuf au vin crepe: beef braised to near disintegration in a potent red wine sauce. The thin, eggy crepe had artfully browned edges and was arranged around a generous mountain of tender beef with the careful dishevelment of Meg Ryan’s hair.

On my next visit I brought Shorty, not usually a fan of French food because it’s often heavy on butter and cream. She ordered two salads: one with beets and goat cheese, the other endive-based with Roquefort and walnuts. Both were splendid for different reasons. The endive salad did justice to a too-often overlooked vegetable, and the beet salad tingled with an unbelievably tart champagne vinaigrette. My only complaint was that I would have hoped, this time of year, for vine-ripened tomatoes—the ones on the salad were stiff.

As we ate, Chef/Owner Jean-Pierre Gozard periodically cruised the dining room with just the right level of stress. He was like a lookout on the crow’s nest of a ship, the person whose job it is to scan the horizon for trouble. 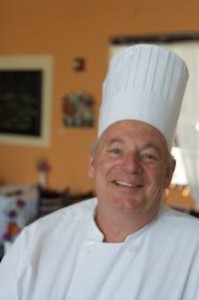 While an order of escargot was amazingly tender, it was hard to taste anything but overly salty butter. This bump was quickly forgotten when my molecules were rearranged by the sole meunière. Sole is not my favorite fish. But in her autobiography, Julia Child described a sole meunière—enjoyed when she had just arrived in France—as “an epiphany” and “the most exciting meal of my life.” So I ordered it.

Cooked in a thick lemon-butter sauce, the sole that rocked Child was a flat filet, while Jean-Pierre served his filets rolled; they sat like boats in a sea of sauce that was so good even my butter-bashing girlfriend lapped it up. Meanwhile, a ratatouille crepe encapsulated the rustic, peasant-style side of French cuisine. Emboldened with herbs, the crepe contained a juicy array of summer squash, eggplant and tomato.

As the sun set over the parking lot, Le Troquet’s busboy lit a candle at our table, and a starry night of low-voltage fixtures swelled to life below the café’s metal firmament. It was a good day to be a restaurant critic. But I felt bad for the dishwasher, who must have felt as useful as the Maytag repairman.

top
We use cookies to ensure that we give you the best experience on our website. If you continue to use this site we will assume that you are happy with it.Ok